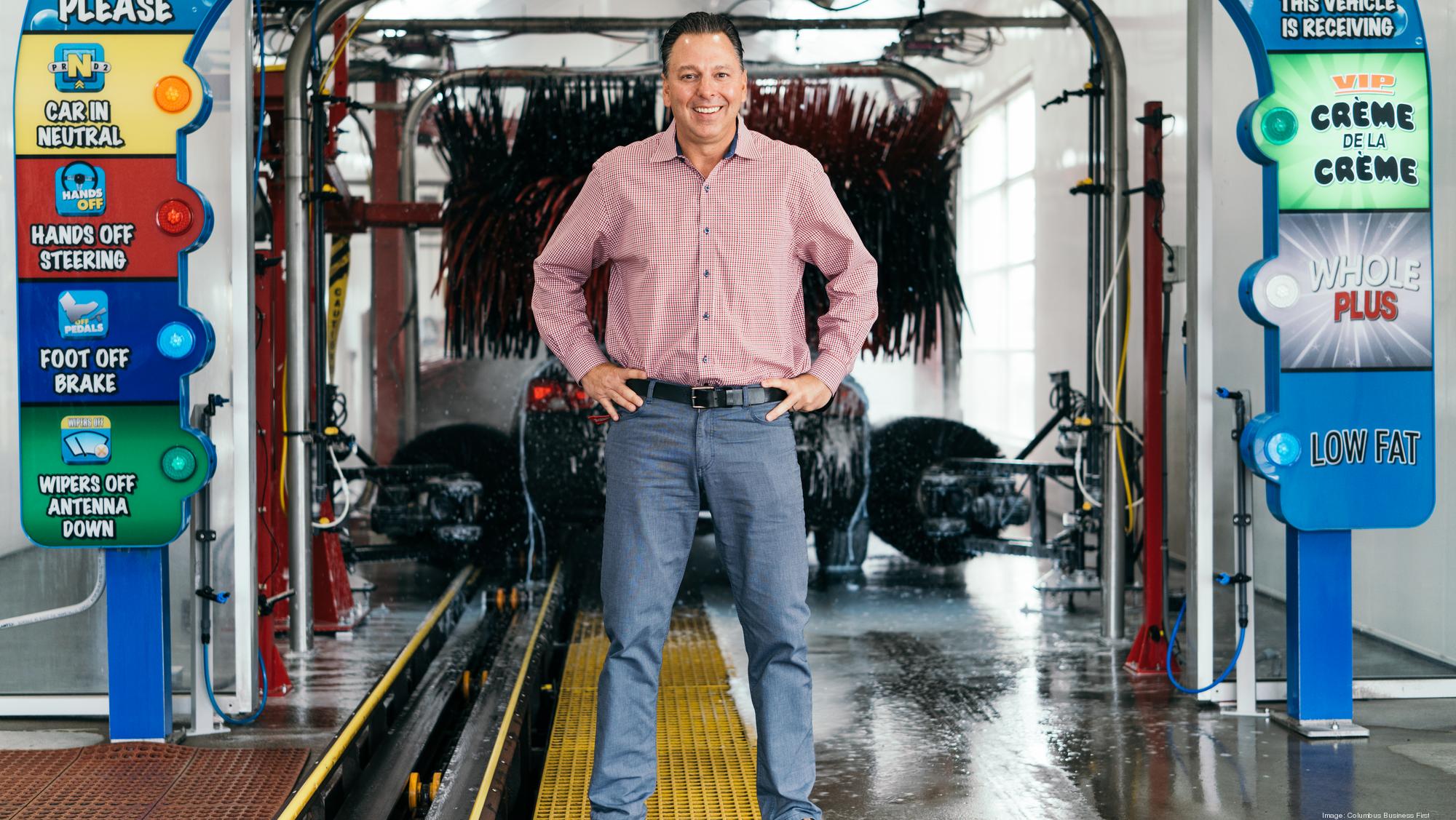 Central Ohio is home to major players in a variety of industries.

Education? Go ahead and yell O-H about anywhere and Ohio State University’s reach is immediately evident.

Car washes? Yes, that too.

The industry isn’t the most talked about or the flashiest, but an estimated 2 billion vehicles go through car washes in any given year, according to a 2018 report by Grand View Research.

And in that world, Etna-based Express Wash Concepts is rising in the ranks as founder John Roush continues his decade-plus push to open and acquire locations.

Express Wash Concepts is on the cusp of joining the 10 largest car wash operators in the United States.

“Everyone has cars,” Roush said.

What everyone doesn’t have is time and that’s where Express Wash Concepts – operating as Moo Moo Express in Columbus – thrives.

Right now, Express Wash operates 38 units. Although that might seem small compared to other industries, it’s huge in the world of wash and wax.

And that figure is only growing as new deals and a new $200 million credit facility is expected to fund at least 20 new locations a year for the next several years, putting the business on a path to 100-plus sites. The company declined to disclose annual revenue.

From its Central Ohio base, the business stretches to Cleveland, Dayton and Toledo. It moved into Pittsburgh last year and acquired a Virginia-based operator that’ll expand it on the Atlantic Coast, from Maryland to North Carolina.

“We can easily get to 100 units, but that doesn’t mean anything if we’re not doing a great job,” Roush said. “The next store needs to be better than the last one. We won’t continue growing if we can’t do it great.”

Roush started mowing lawns as a middle schooler and launched a successful landscaping business while still in high school.

But it was a dirty truck that pushed him into the car wash world.

Working as a construction project manager, Roush’s days were spent on dusty, dirty project sites. One day in 2007, he learned his local car wash in Pickerington had shut down.

“I’m a neat freak,” he said. “I’ve just always liked to keep my car clean. I was in constant need of a good car wash.”

The neat freak had a need and his business mind saw an opportunity: Surely he couldn’t have been the only one who missed that Pickerington car wash.

He started studying the field and not just the business aspects, but the equipment, customer service, etc. One of his fact-finding missions took him to an AutoBell Car Wash in Acworth, Georgia.

“It was in May, a Tuesday,” Roush said. “Beautiful landscaping. Beautiful buildings. Music playing in the background. Lots of energy. People out there vacuuming cars. The employees were all jazzed up. There were a thousand cars there that day and I was like, ‘This is amazing.’ ”

He said the whole thing had a Disney feel.

But how to take an operation such as that and make it stand out in Columbus?

Roush knew he needed a distinct visual, something that would draw attention more than a bland, personality-less rectangle. The inspiration came from a real barn called Hunter’s Run that had burned down in Pickerington, and the name Moo Moo occurred to him as he drove past a field of cows.

It was as simple as that.

The first Moo Moo opened on Broad Street in October 2008 followed quickly by units in Pickerington and Upper Arlington in the first nine months for the business.

“It’s been off to the races since then,” Roush said.

Though the looks might change, the underlying approach does not. Back to that Disney influence – a clean, polished facility and smiling, happy, appreciative customer service is key.

“If there’s trash blowing in the parking lot or hoses that are trashed or stuff is not working right, it all deteriorates the customer’s experience,” Roush said. “It’s our culture to not allow that to happen. We get our hands dirty to keep it good for the customer.”

Express Wash also prides itself on its equipment and the diligent maintenance required to keep it running smoothly.

“It takes a ton of work because essentially it’s a tunnel trying to kill itself. … It’s electric and water all mixing together,” Roush said. “It’s just a really tough environment for machines to live.”

The company also has found a way to manufacture loyalty. Its unlimited membership allows customers as many washes they want for a flat monthly fee. At Moo Moo, that’s $24.99-$32.99, depending on the level of wash – Low Fat, Whole Plus or Crème de la Crème, to stick with the theme.

“It takes the weather out. You don’t care about rain anymore,” Roush said. “You can run it through in three minutes and get it clean. There’s big value to that.”

The membership is good at all locations across all brands.

“Now we have customers who are with us every month,” Roush said. “From a cash flow perspective, it’s amazing, but also from a stability standpoint, we don’t have the ebbs and flows of weather.”

Fall and spring typically are slower times for car washes, while summer brings steady business. Winter is busy, though it often comes in spurts on sunny days when snow has briefly abated.

“There are snowy, rainy days where we’re still washing 300 cars per site because people want to get the salt off,” Roush said. “They don’t care if it’s wet. They’ll just come back tomorrow.”

Express Wash was in the top 20 conveyor/tunnel car wash operators in the country last year when it had just 31 locations. It’s grown to 38 in the few months since that annual ranking was published and should be in the 60s by next year.

That likely would vault Express Wash into the top 10 and possibly as high as No. 5, pending development by other companies.

Dissecting the national rankings highlights the opportunity as well. The majority in the top 20 are based in the western United States. Just two other operators are in the Midwest – the 36-unit Crew Carwash in Indiana and 55-unit Tommy’s Express out of Michigan. There’s only one based on the Atlantic coast as well, which is Express Wash’s new growth territory.

Driving the growth is a 2018 investment in the company by Wildcat Capital Management, run by David Bonderman, cofounder of the family office TPG Capital. That deal also joined the Moo Moo and Flying Ace brands.

The business went from about one new location a year to multiples of that, having more than doubled in size since then while adding the Cleveland, Toledo and Pittsburgh markets in addition to the acquisition this spring of Virginia-based Green Clean Express.

Future growth is fueled not just by the new $200 million credit facility, but also an experienced team and a scalable system.

“We’ve got our own construction development in-house, which is pretty rare for the car wash business,” Roush said. “Usually guys are outsourcing those things. We can move quickly and get set up and running and washing.”

The lure of car washes

Consumers are keeping their vehicles longer than ever. Auto industry researcher IHS Markit last year said the average age of cars and trucks on the road is almost 12 years old. That figure was nine years almost two decades ago when the survey began.

The longer a vehicle is kept, the more likely the owner is to care for it, but even that has become less hands-on than before.

In its 2020 industry report, the International Carwash Association said 83% of Americans used a professional car wash in 2019 and home washing continued its downward trajectory. A previous study from the group noted that nearly half of consumers in 1996 washed their cars at home.

“You ask the customer in the parking lot where they washed their car before,” Roush said. “The answer is maybe their driveway or down at the gas station.”

Although big companies are growing, the space remains highly fragmented and mostly dominated by small operators.

An estimated 90% of car wash services are small businesses with five to 15 employees, according to the Grand View Research report.

“The industry as a whole is going nuts,” Roush said. “All the equipment guys are building gear as fast as they can because it’s a big booming industry in the U.S. at this point.”

Though his business is thriving, it isn’t an easy industry. It’s costly for starters, with each unit running $3.5 million to $4 million to open.

There’s a perception battle with customers, which is why being clean and polished is so important to the brand, and sometimes with city agencies.

“In some zoning departments’ eyes, we need to be right next to adult bookstores and strip clubs,” Roush said. “We’ve got some communities we struggle to get into. They’ve zoned us out, but we do have a good track record.”

And every successful opening is another step toward greater acceptance.

“We built such a great unit, aesthetically,” he said. “Our buildings and our landscaping, we spend a ton of money on. I started as a landscaper so I love good landscaping.

“We’re not afraid to build a really, really nice building. We just need to control our traffic and make sure we’re a good neighbor to everybody.”